Phase Three is for athletes, health and fitness fanatics, and all those who are in need of a serious intervention in order to take back their lives and achieve phenomenal results in the shortest period of time. Arthur, who you read about in the Fitness Guide, lost 140 pounds in less than a year using this plan. Dylan lost 100 pounds in 10 months. DDP Yoga Phase Three is for anyone who wants to see the results that aren’t typical. When you see a perfect physical specimen and think, “there’s no way I could ever lose that much weight or look like that”, you’re wrong!!! Yes you can!! It’s up to you! If you have rock solid will power, are willing to commit to the science of weight loss, and won’t let anything stand in the way of your goals, you belong in DDP Yoga Phase Three. This is where I live each and every day. It’s my life. It’s my lifestyle. For me it’s not hard…it’s incredible!

I know my body is as fit on the inside as it is on the outside and I wouldn’t have it any other way. Walk up the DDP Yoga ladder with me…In Phase One, we get rid of processed foods, junk foods and fast food, including white flour and sugar. In Phase Two, we also eliminate all dairy products, gluten and wheat. In Phase Three, we go completely organic (whenever possible), plus we add the priciples of food combining. Now we are at the top of the ladder!!! Just wait until you see and feel the results!

In Phase Three we go organic! It sounds good, but most people don’t really get what “organic” really means when it comes to food. Organic refers to a system of farming of fruits and vegetables that works to maintain and replenish soil fertility without the use of synthetic and toxic chemicals. Organic also means produce and meat sources that are neither genetically modified, irradiated or treated with synthetic hormones. Most main-stream grocery stores have now realized that the demand for organic foods is on the rise. If you have any intention of living a healthy, happy and phenomenal life you must eat as cleanly as possible! Especially as you get older. It is an absolute crime that our food supply is being genetically and chemically altered in order to maximize profitability at the cost of vitamin and mineral-depleted soil, that yields a big shiny piece of crappy tasting produce that’s full of pesticides and slowly makes you sick.

According to a recent study from Stanford University, fewer pesticides were found in organically grown foods than conventionally grown fruits and vegetables. What more do you need to know? Do you think pesticides are good for your health?

How about conventionally processed chicken or beef that’s been pumped with antibiotics, hormones, and saltwater. It may be less expensive but at what cost?

The CDC has recently reported a 265% increase in the rate of food allergy-related hospitalizations over the last decade. The American Cancer Society has reported that the United States has seen the highest increase in cancer rates than any other nation in the world. Do you think that these statistics have anything to do with our conventional food supply? Do you think that genetically modified, pesticide-ridden, antibiotic & hormone infused foods will make you sick? I know that I don’t want to put that crap into my body!!

The Bottom Line Is: find a local Farmer’s Market near you and buy the cleanest, freshest, organic and locally grown foods that you can afford! By doing so, you’ll also help the green movement because when you buy locally, you won’t be paying for trucking costs to the grocery store…and your fresh food will taste delicious!! Are you convinced?

The theory behind food combining is that proteins and carbohydrates digest at different rates. By eating foods in certain combinations, we can assist our digestive systems and get them working at peak performance! This not only enhances how we feel by unclogging our systems, but it helps us to lose weight quickly and efficiently.

In food combining, we are actually paying very close attention to the types of foods we “combine” at any given meal. As a general rule, we do not consume protein sources with carbohydrate-rich sources – so no more steak with potatoes in Phase Three, guys! Low-starch vegetables can be included with any meal. Leafy greens, cabbage, asparagus, cucumbers, zucchini, onions… you get the idea. There’s nothing better than making yourself a delicious salad before eating your protein or carbohydrate source! If you do eat some starchy carbs as a meal, just ensure you do not consume protein as well.

Eating in this sequence and combination is the most efficient way to turn our food into fuel with minimal stress on our digestive systems. It gives us optimal energy input with minimal energy used. While this eating plan can be more challenging, I have seen some amazing results and have felt the difference myself.

Fruit is both an energizer and a cleansing agent that is best eaten on an empty stomach…great for breakfast or a mid-morning snack so you have time to burn off all that natural sugar found in your organically nutritious and totally delicious fruit! It’s best not to eat fruit late in the day on Phase Three.

An easy reference chart for Phase Three (do’s and don’ts): 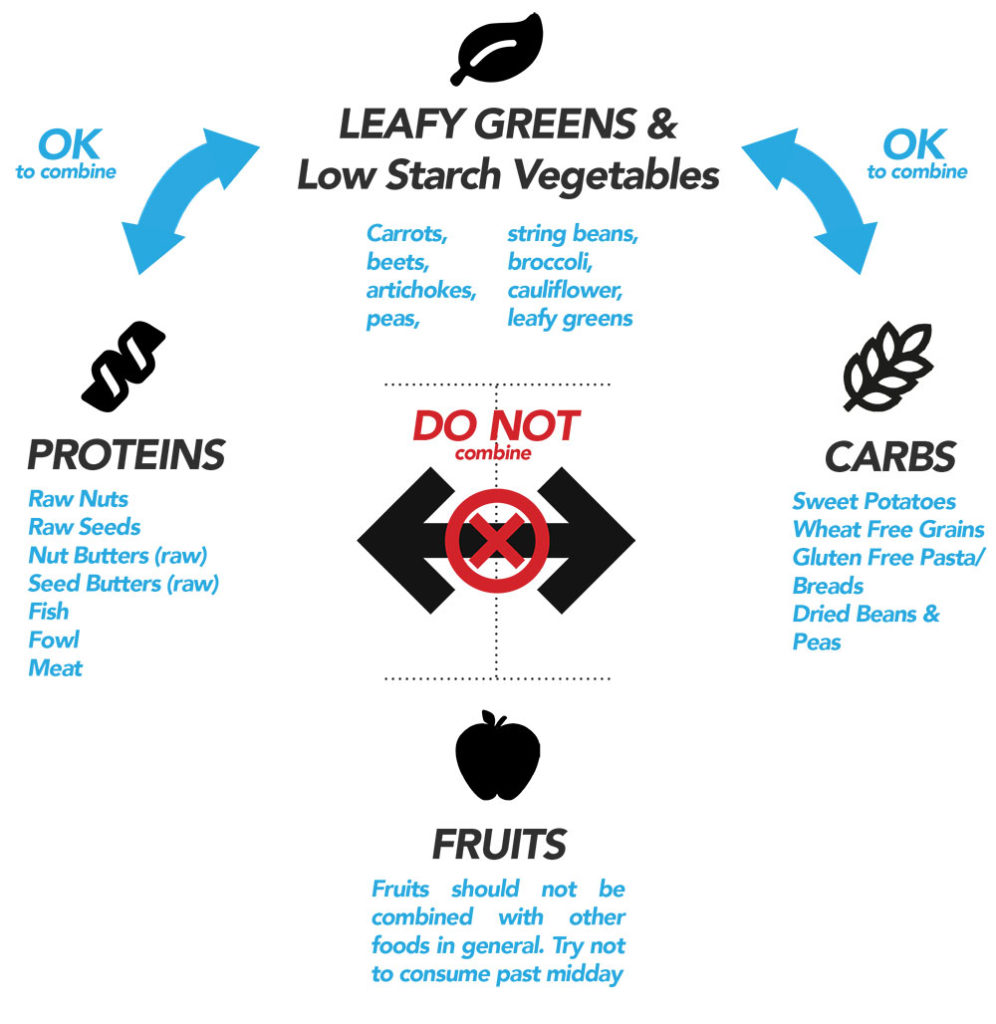 In Phase Three I will also introduce you to the way I begin each and every day… with organic juicing. Wait until you experience the rush from live enzymes and anti-oxidant rich fruits and vegetables in their most powerful state! You’ll never reach for a cup of coffee again.

Organic juicing helps you cleanse and re-energize your body like the scrubbing bubbles that swooped down on your tub and tiles and left them sparkling clean…with more vitamins, minerals, enzymes, and phyto-nutrients than you could ever consume in any salad or fruit cocktail. Believe me when I tell you, ladies and gentlemen….organic juicing is like rocket fuel!!

Regardless of the level you select, you will learn how science and nutrition combine to turn your body into a machine that uses your own fat as an energy source. Imagine your body is a car, but instead of adding fuel in the form of processed foods and refined carbohydrates, you are using your own fat reserves as an energy source! This constant source of energy keeps you feeling great all day long, without the dips you get from eating processed food.